The Ties That (Put Us in A) Bind

With my recent focus on the likely contenders in the 2012 presidential election, I got to thinking about that American institution that some of us love to hate around election time—the Electoral College.  The body was established in Article II, Section 1 of the Constitution and has been altered slightly with the passage of the 12th, 20th and 23rd Amendments.  The system applies the principles of federalism (power is divided between a central governing authority and constituent regional governing units) and republicanism (representative government, as opposed to direct democracy) to the election of America’s chief executive.  It accomplishes this by allowing each States to choose electors, by any method they choose; those electors then vote directly for president and vice president.  Each State is given a number of electors that is representative of their population and an additional elector for each of their senators (increasing the influence of small population states).

Over the years there has been some controversy over the Electoral College, usually centered on three possibilities that the system allows:  a large disparity between the percentage of electoral votes and percentage of popular votes of the candidates; that the winner of a majority of electoral votes (and thus, of the presidency) could fail to attain a majority of popular votes cast; and, the system unduly increases the influence of small states.  Detractors usually highlight examples illustrating these points in order to argue that the Electoral College is an archaic system that should be scrapped in favor of direct election of the president.  Supporters contend that only few hiccups have happened (4 elections out of 56 are plausible hiccups) and that no changes should be made because the system has worked relatively well.  Still others maintain that the system could minimize the possibility for these predicaments with a few adjustments.  I believe that benefits and shortcomings can be identified with each argument and that a later post could be in order to describe some of the hiccups and detail some proposals.

With the history and context out of the way, I can get back to the origins of my thoughts for the post:  potential electoral/Constitutional intrigue surrounding the 2012 election.  Events over the course of the president’s term could limit his ability to recreate the conditions that produced his historic victory last time around.  Let’s suppose President Obama and Vice President Biden are re-nominated and faceoff against a Republican ticket of Gov. Mitch Daniels (IN) and former Gov. Tim Pawlenty (MN).  The Midwestern oriented Republican ticket could plausibly win some of the states Obama carried from that region in ’08, as well as recapture some Southern swing states.  The contest could produce and electoral map that looks much like this: 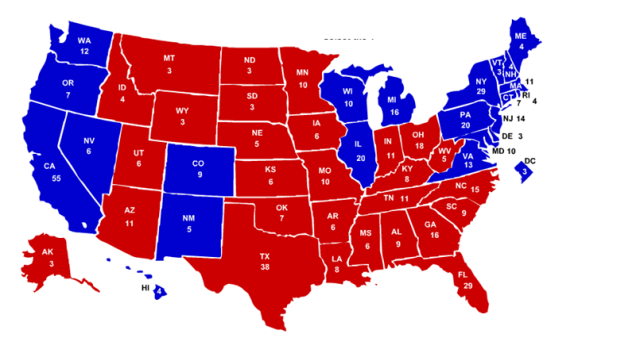 Here is where the intrigue comes in; this map produces a 269-269 tie.  What would happen then?  Well, it could be a couple of things, both of which would likely cause outrage.

I’ll start with the one I think is less likely.  An elector in a state that does not bind electors to vote for the candidates who won the popular vote of that state could vote for the other team, thereby delivering them a majority of electoral votes (i.e., an independent-minded New Hampshire elector could decide to vote for the Daniels ticket or a Florida elector could vote for the Obama ticket).  If two such electors from opposite parties decided to work together, they could split their votes for president and vice president and create a fusion administration. The “faithless elector” outcome is not likely because parties choose electors from a pool of people who are volunteers, fundraisers or influential policy shapers within their respective parties—this would be party suicide.  While this all seems sinister, it is legal because there are no constitutional provisions or federal laws to prevent it (some states have laws to prevent faithless electors).  In fact some scholars believe that the Founders did not want a winner to be produced by the Electoral College, but instead wanted electors to narrow the candidates down and let Congress decide.  That leads me to the more likely next step if an Electoral College tie happens.

Should no candidate receive a majority of the electoral votes, the House of Representatives would choose the president, with the representation from each state having one vote (34 state delegations must be present for a quorum); the Senate would choose the vice president, with each senator having one vote (quorum: 67 senators); Washington, D.C. has no votes.  After the joint session to count the votes ends, the House and Senate would meet to cast their votes.  This would all presumably take place on January 6, 2013, after the new 113th Congress has been sworn-in.  If conditions remain largely as they are today, I expect that Republicans would retain control of the House.  Assuming that the party control of the state delegations remains as it is today, Republicans would control 32 state delegations, 6 more than the majority required to put Daniels into the White House.

The controversy arises when we consider the states whose delegations are controlled by the party who did not win the state.  For instance, Obama would likely win his home state, Illinois, but its Congressional delegation is 11 Rep. and 8 Dem.  How would Illinois vote?  Would they go with the favorite son, who the voters there will undoubtedly elect, or will the party controlling most of the delegation’s seats force a vote for the Republican ticket?  Or will this and other delegations with the same quandary (which could include FL, VA, NC and IA) abstain from voting?  On the Senate side, each individual senator would have to weigh whether to go with his constituents, his party or his best judgment in determining the vice president.  The situation could get even dicier if there is a clear winner in the popular vote (though, constitutionally the popular vote does not matter at all).  If neither office could be determined by January 20th, the Speaker of the House, likely John Boehner, would become the acting president until a winner could be chosen (Would he be the 45th president or just the first acting president, second if you count Reagan…that’s a joke by the way?).

Realistically, we probably don’t have to worry about this.  There has only been an Electoral College tie one time in the history of America (1800) and the quirk that caused that was fixed by the 12th Amendment.  Further, the House of Representatives has only chosen the president twice (1800 and 1824).  The Senate has chosen the vice president only once (1836).  If any of this happens in 2012, I can imagine an instant plethora of lawsuits and countersuits, as well as backroom wheeling and dealing for votes.  It could be a ridiculous spectacle that leads to a national outcry to scrap a system that has worked for over 230 years.  One good thing is that we would get to see what the candidates are made of: would they behave as statesmen who rise above the inevitable fray until the nation’s chief executive is chosen by its people’s representatives or would they be petty and try to score cheap political points in a quest for advantage?  Like I said, this is a hypothetical that is unlikely to happen, but if it does, at least you’ll be informed.  Do you have any thoughts, insights or questions?  Join the Discourse!

1 Response to The Ties That (Put Us in A) Bind